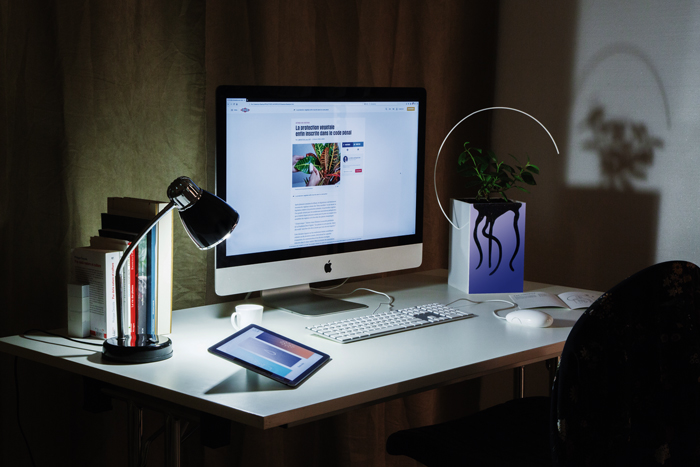 In 2025, plants are finally recognised as sentient beings. Following the many actions of antispecies associations, advocating the consideration of the well-being of plants, the articles on animal protection are extended to domestic plants. The latter are then protected by the Departmental Directorate in charge of the Protection of Populations (DDPP), missioned to collect data of connected pots. Mistreating a plant is the risk of being banned from possessing one, to being fined, or even imprisoned. 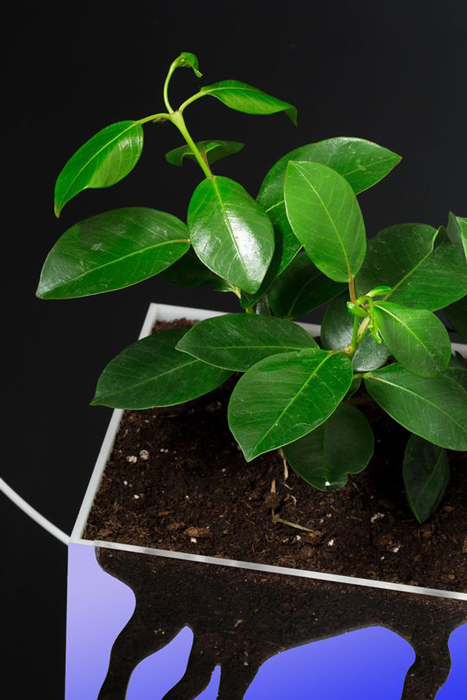 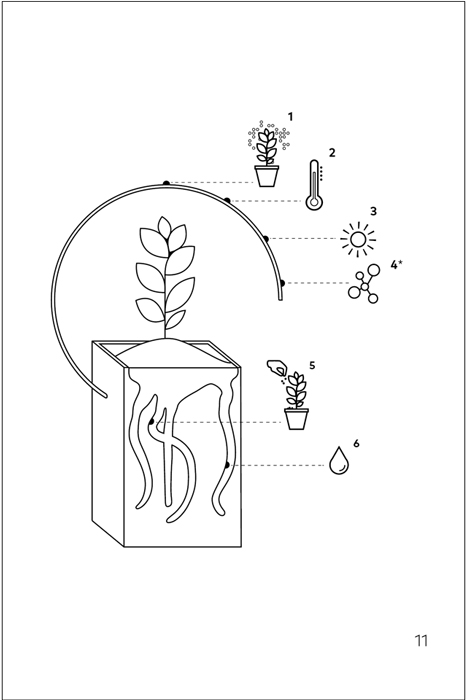 We prototyped a connected pot and its application, as well as a user manual.
The sides of the pot are interactive and tinted according to the level of water, sunshine, nutrients... of the plant, captured by various sensors. The slightest lack is easily identifiable. The app uses the same colors as the pot in order to have an intuitive interface.

A connected pot and its app 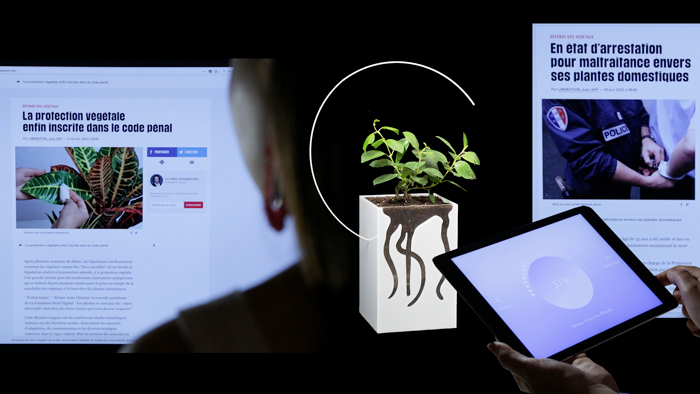 This kit includes the prototype of the connected pot as well as its application and its instruction manual.
In order to write our story, we made false articles where are explained the new laws in force; by adapting the code of the french news website Libération. We worked from french and current texts on animal protection to make this fiction credible. 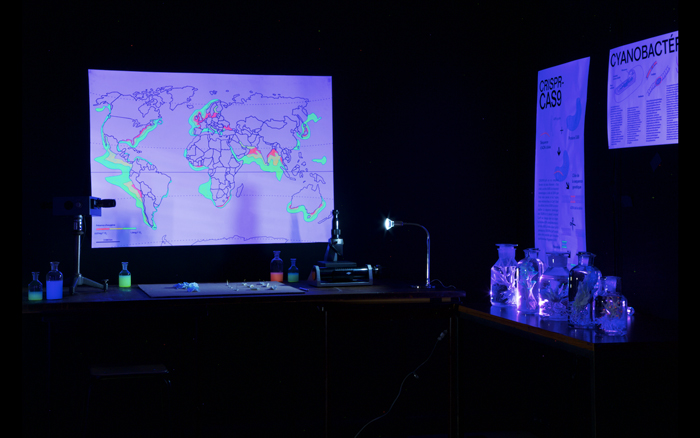 Thanks to CripR-Cas9, the genetic modification method that has become available to everyone since the 2020s, everyone can become a "sorcerer's apprentice".
Thus, we imagined a wild laboratory, where experiments are conducted, to modify the genome of certain aquatic plants to transmit the ability of cyanobacteria to adapt to the oceans dead zones : plants capable of photosynthesis in anoxic environments and to enrich the latter with oxygen. 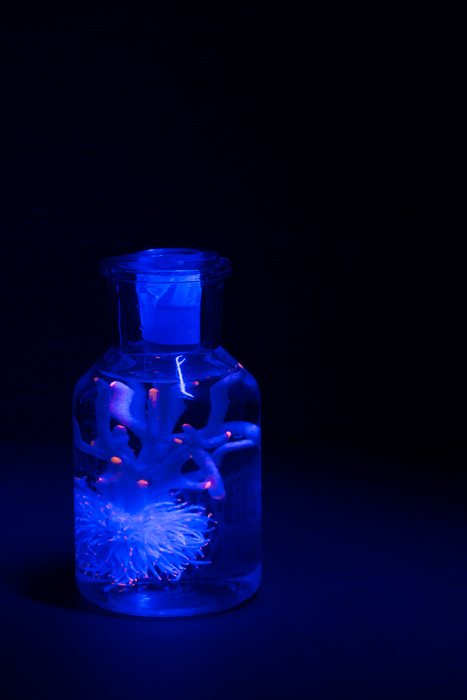 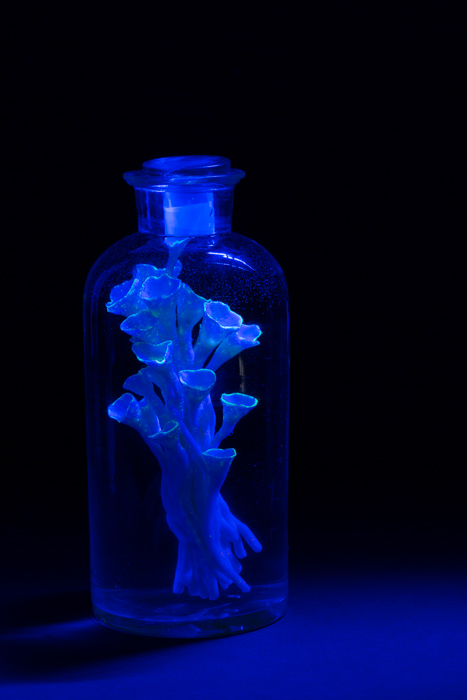 We realised various silicone sculptures preserved in chemist jars to give life to our fiction.
These plants are experiments of genetic modifications to create beings able of living in the ocean dead zones, depleted in oxygen. We thus question our ability to "play" with the living.. 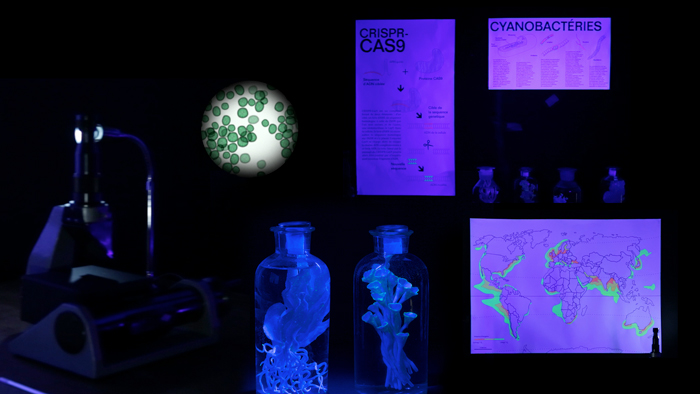 This kit includes various silicone plants, explanatory scientific panels (how CrispR-Cas9 method works, as well as oxygenic and anoxygenic photosynthesis, what cyanobacteria are, and the distribution of dead zones in the ocean) and a microscope in which is embedded a cell animation. 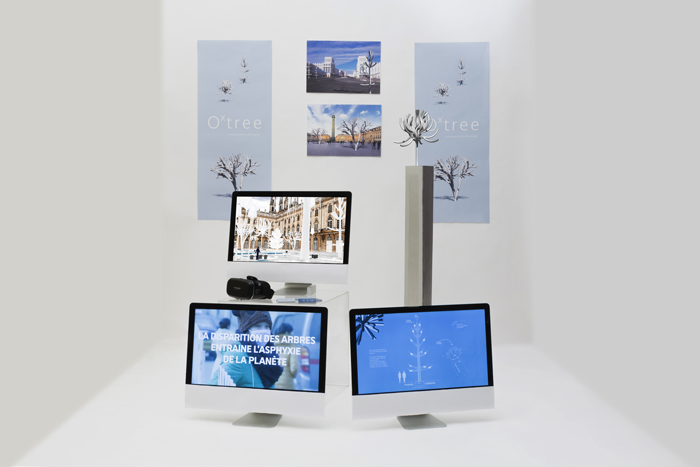 In 2040, trees that produce our oxygen have disappeared... But no worries, a large company named Climeworks invents a technology capable of capturing carbon dioxide and releasing oxygen : Oxtree.
These tree-robots absorb the CO2 which will be then transformed into carbon products, new source of circular energy. The air is then purified and enriched with dioxygen produced by electrolysis. 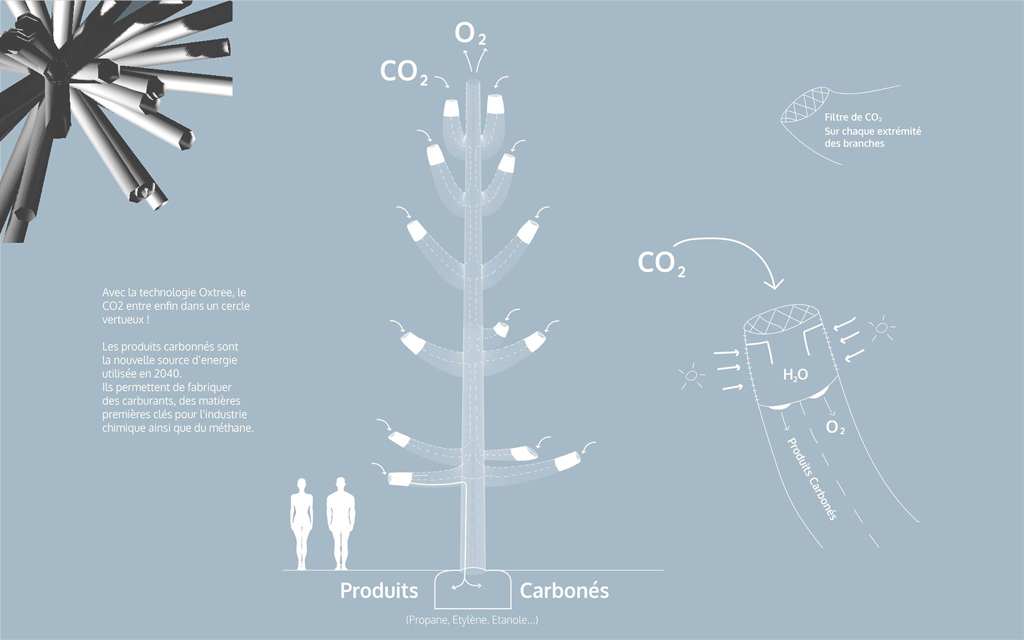 In a spirit of biomimicry, academic and industrial laboratories are looking to take inspiration from photosynthesis of plants to "invent" new technologies, called artificial photosynthesis.
It would be a question of capturing the solar energy, transforming it into electricity, then being able to use this secondary electrical energy to convert a mixture of water and CO2 into oxygen.
After a meeting with a physicist of the College de France, we made 3D trees capable of performing artificial photosynthesis and schematized their operation.

A technology of artificial photosynthesis

We made the brand's promotional video to retranscribe the framework of our fiction. Playing on the advertising code problem/solution allows us to bring a second degree and a criticism on our propensity to focus more on technology than on living beings.

Promotional video of the brand 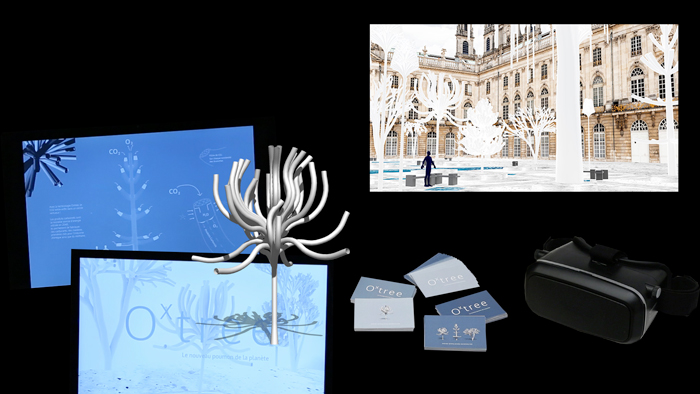 This kit includes a 3D VR stage, a prototype carved tree and the brand's promotional video as well as different business cards and kakemonos that give the illusion of a commercial stand. 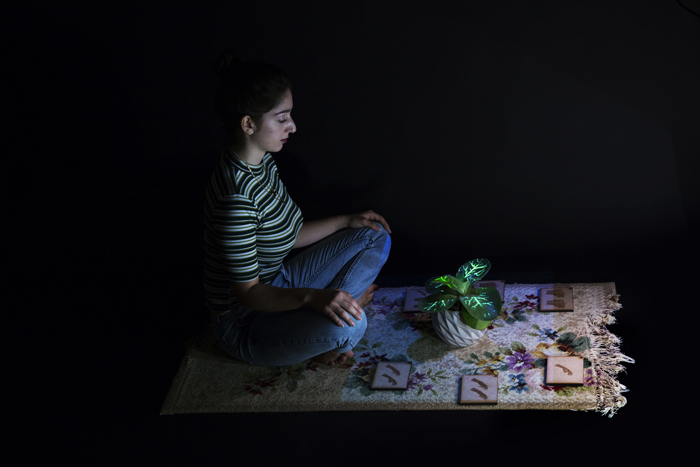 In 2035, some people are initiated to a kind of language, a secret code. It is a hands choreography  which, when it is correctly done, makes it possible to interact with a plant in a sensitive, almost "spiritual" way. It reveals the interiority of the plant, its flows of energies that run through it, in the form of a graphic projection. The plant also responds via sounds. The initiated person becomes "awake" to the plant world. 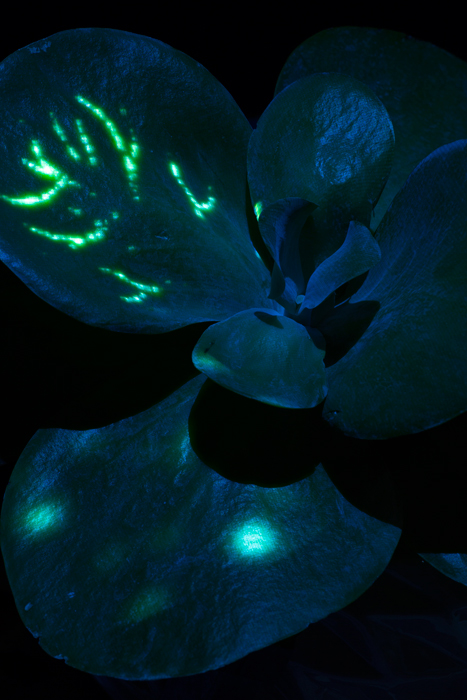 Thanks to the Leap Motion system, a form of communication with the plant is possible. A series of gesture combinations trigger different animations projected on the plant as well as sounds. Through this sensitive and poetic experience, we try to symbolically translate the invisible and the inaudible in order to understand the modes of communication of the plants we have studied.

An interactive installation : illusion of communication 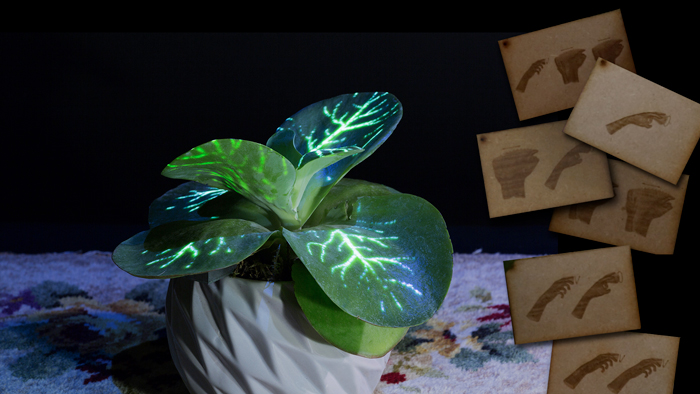 Produced within the Anima collective,
the project "What if tomorrow ...? invites us to reflect
on the relationship we have with nature and the plant world.
Through four scenographic fictions,
we offer a typology of relations.
Between utopia and dystopia, each scenario, placed in a more or less futuristic world, relies on current scientific and technological advances and highlights ecological and societal issues.