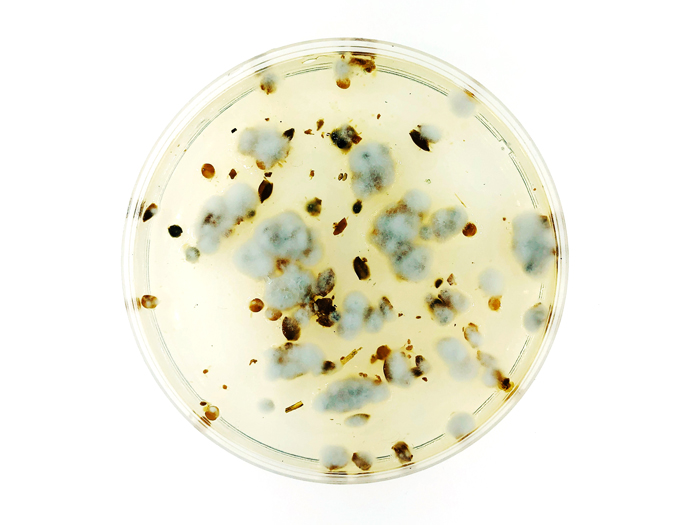 In order to make this speculative design project credible and plausible, we carried out a series of research and experiments around mycelium.
Mycelium feeds on organic matter that it decomposes. To develop, it needs carbon (simple or complex sugars), nitrogen (proteins), mineral elements (sulfur, phosphorus, potassium, magnesium, calcium) and trace elements. (iron, zinc, copper, manganese...)
Can mycelium feed on our organic elements like our hair or our nails?

In order to compare, we experimented with different substrates (supports in which mycelium grows) such as straw or coffee grounds, generally used in mushroom crop.

We conducted experiments with hair as a substrate.
Hair is composed of 95% keratin (a protein) and contains 18 amino acids. Nail is also made of hard keratin, water, lipids, calcium, iron and phosphorus. Sweat contains minerals, proteins. potassium and nitrogen. Thus, these elements meet the nutritional needs of mycelium. 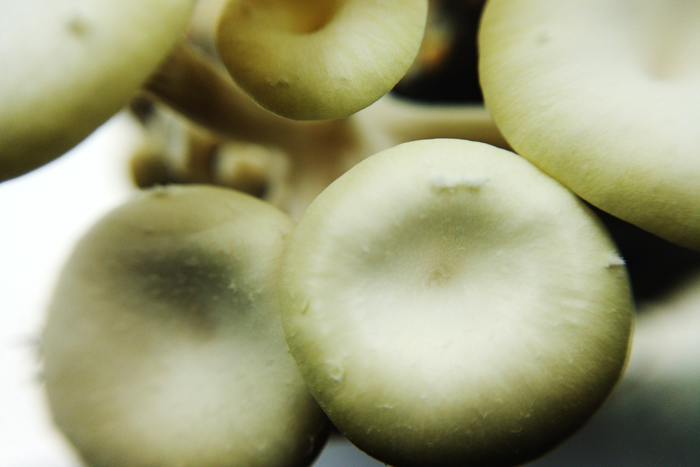 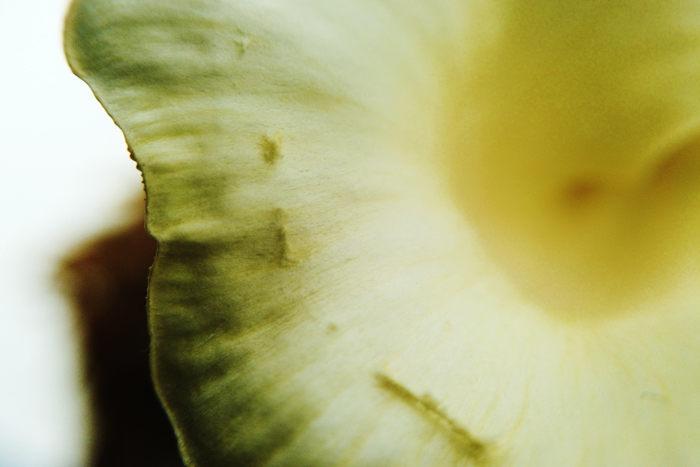 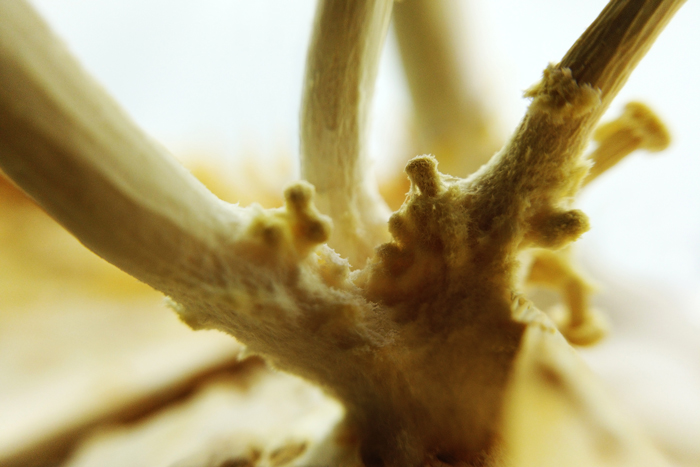 According to some studies, mushrooms act like probiotics and stimulate the growth of the gut microbiota, destroying the "bad" bacteria and favoring the "good" ones.
They have anti-inflammatory, anti-oxidant, anti-allergic and anti-cholesterol properties and strengthen the immune system.
In Asia, traditional medicines use them to preserve the body balance such as Reishi, nicknamed "elixir of life".

Mushroom : a Functional food and a probiotic 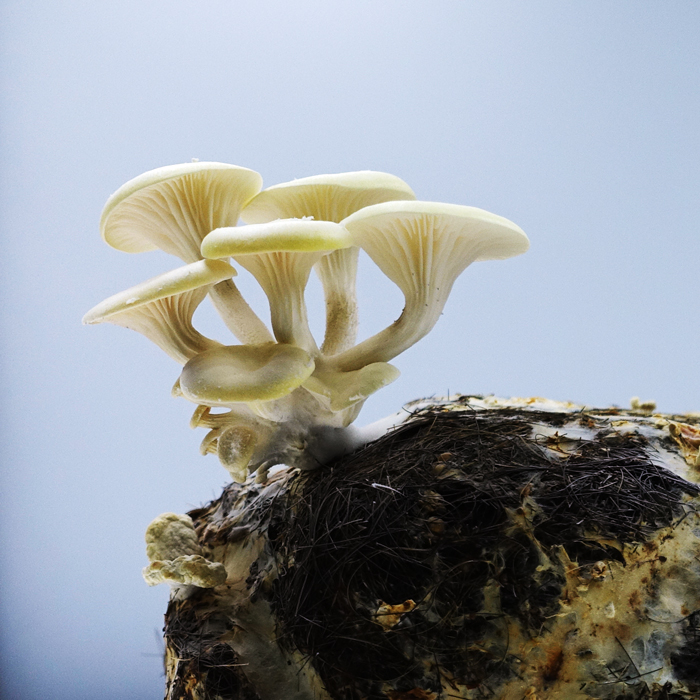 Keratin, sensitive to stress, to our hormones and our food, keeps all traces of what we have eaten or even smoked. Some diseases such as anemia leave traces on our nails and we eliminate environmental pollutants through our sweat.
What if, a genetically modified mycelium could "intelligently" treat all this information in order to create mushrooms meeting the specific needs of our body, such as personalized nutraceuticals? 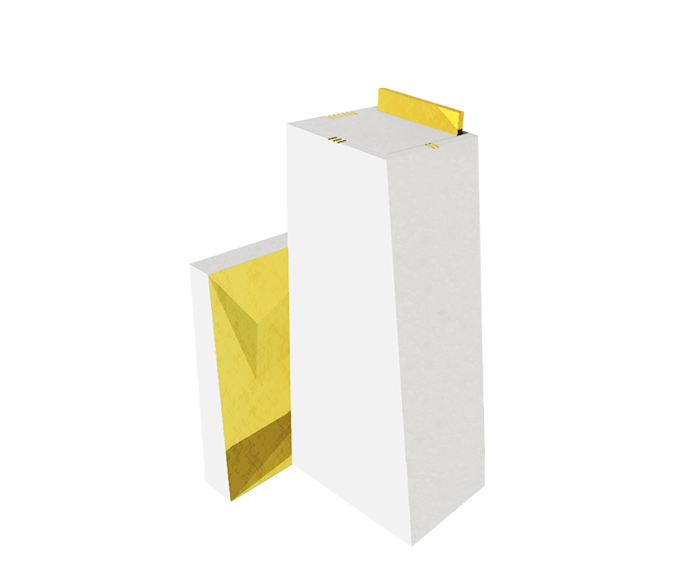 In order to embody this project of speculative design, we designed a new object : inspired by contemporary vases, this refined style "mushroom farm box" takes place in a living room, as a decorative object.
To counterbalance the repulsion caused by the idea of using our hair and nails, we chose an elegant and minimalist aesthetics. 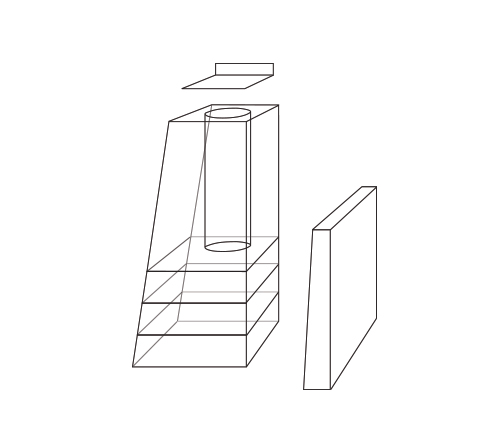 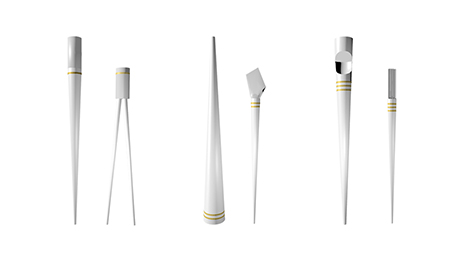 Based on similar proportions, we designed a series of three tools for collecting organic elements (sweat, nails and hair), and three tools for transfering the elements into the "mushroom farm box".
Still in a refined and elegant style, the conical shape of the objects provides ergonomics. 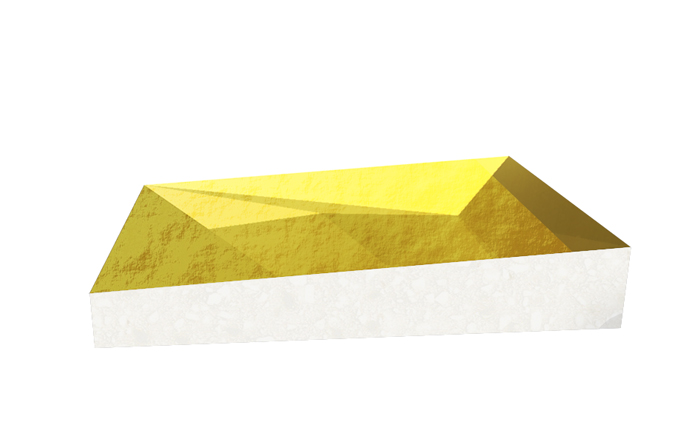 The tray is used as a receptacle for the different organic elements.
Thus, I can go into a more suitable place, like my bathroom, to collect my elements and go back to the main object.
The chiselled inside, with a pouring lip at one end, allows me to directly transfer my elements to the "mushroom farm box", using the appropriate tools. 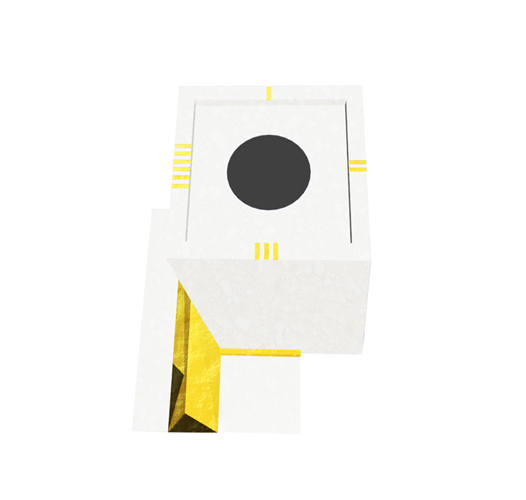 This object is built around a ritual. The latter is based on the number 3, a symbol found in witchcraft (the Triskell, the Triquetra ...) and which represents life, death and rebirth.
Like any ritual, it fits into a duration (symbolized by the different marks on the object) and through steps (detectable thanks to the edge of the lid).
Thus, three samples are made the first three days. Then the mycelium incubates for three days. The lid is removed on the sixth day to give way to fruiting which will also take three days (the genetic modification of the mycelium accelerating its growth). 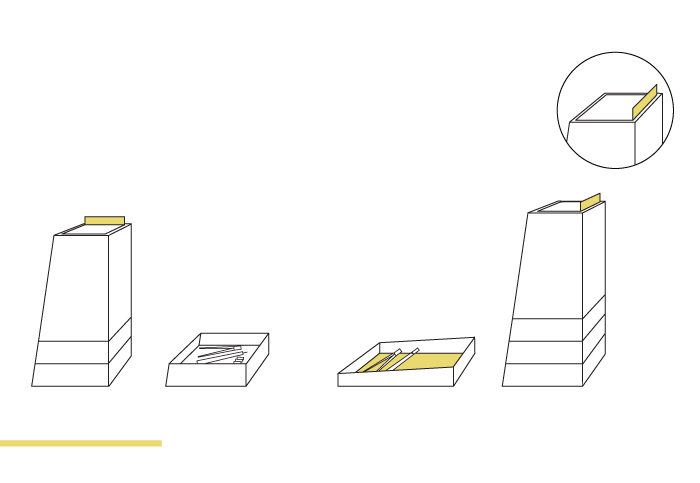 On the first day, I collect my sweat, thanks to the specialized tools contained in the first drawer and the tray. Once inside the "mushroom farm box", I position the edge of the lid on the mark "two", indicating that the first step has been performed.

I fix on the object's tip a cotton filter and pass it on my skin in order to collect my sweat. With the tweezers, I remove the filter and put it inside the "mushroom farm box" containing the mycelium. 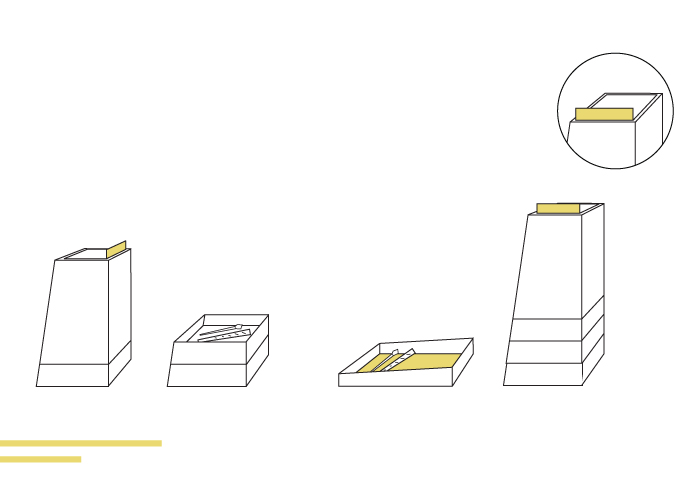 On the second day, I collect my nails thanks to the specialized tools contained in the second drawer and the tray. Once inside the "mushroom farm box", I position the edge of the lid on the mark "three", indicating that the second step has been performed.

I file my nails (this way more easily assimilated by the mycelium) above the tray. With the small scraper, I can pour my nails "powder" into the "mushroom farm box". 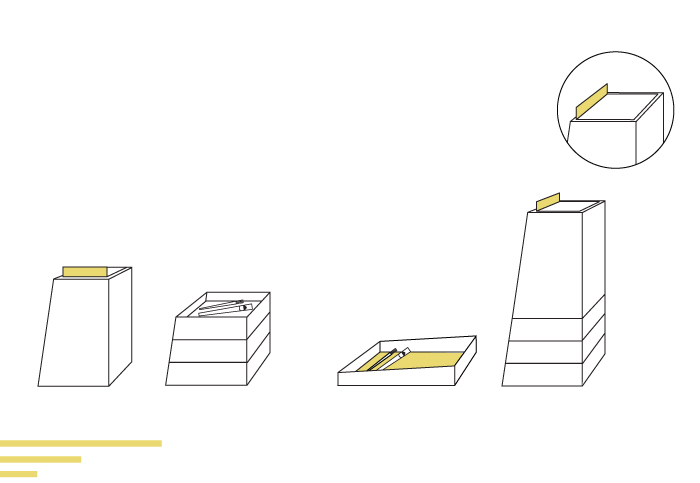 On the third day, I collect my hair, thanks to the specialized tools contained in the third drawer and the tray. Once inside the "mushroom farm box", I position the edge of the lid on the last mark.

I put a hair strand in the sharp-edged opening of the object in order to cut it. Then, I use the small brush to sweep the hair from the tray to the "mushroom farm box". 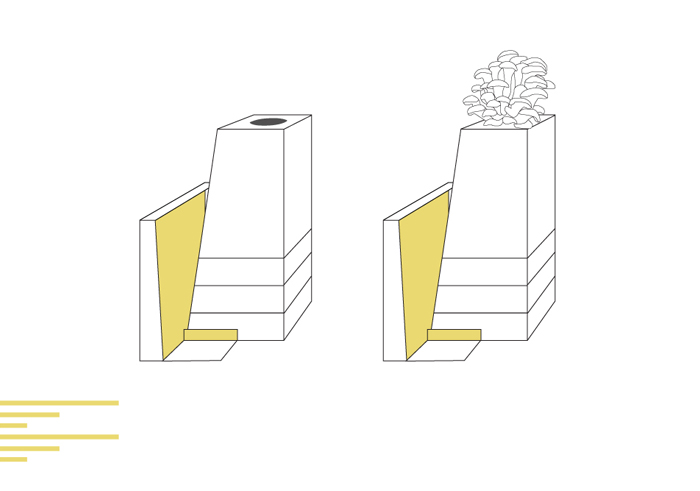 On the sixth day, I remove the lid and places it around the "mushroom farm box". Therefor, the incoming light triggers the fruiting phase of mycelium. Three days later, mushrooms customized to the needs of my body grow ; I can eat them as nutraceuticals.

Last step of the ritual : fruiting 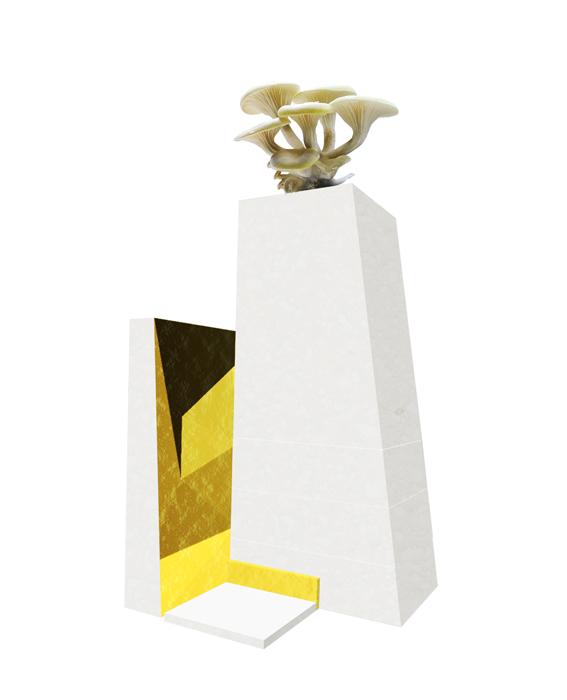 Rehabilitated by the work of Mona Chollet,
the witch's figure, preaching a free body and a reconnection
to nature, irrigates this project of speculative design,
made at Imprudence studio.
What if our body's organic elements, our hairs, nails, fluids,
considered as "filth", were given as an offering
to a forest organism, a genetically modified mycelium,
which would turn them into mushrooms
with personalized effects for our organism ?
Through a contemporary beauty ritual,
a mutualistic relationship between human body
and mycelium creates a new care beneficial to my biome.